The Bengali Season in Nainital

Nainital, derives its very name from Naini lake. Located in the Kumaon region, at an altitude of about 6938 ft above sea level. Enveloped by mountains, lakes and tranquil environs this majestic beauty stretches its mighty frontiers to the incessant flow of travellers. This place is of utmost religious importance to devout Hindus. As the legend has it, Nainital is one of the 51 places ‘Shakti Peeth” in India where some parts of the immolated body of Parvati had fallen while Lord Shiva was carrying her in anger, agony and was doing the ‘Tandav’. A place which is said to be dedicated to Goddess Naina, an incarnation of Shakti herself. 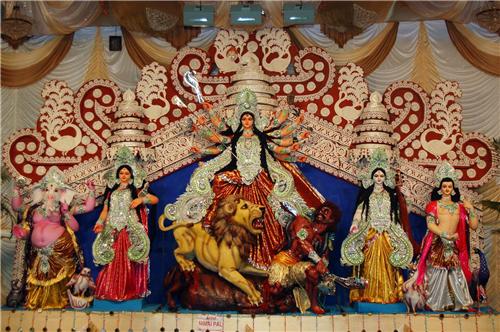 Nainital celebrates Navratri with great fervour and zest. The otherwise serene and calm atmosphere takes a sudden shift and the air is filled with vibrance, gaiety and festive colour. This 10-day-long Durga Puja, brings people together and envelopes the surroundings with festivity. This season of the year is also referred to as the ‘Bengali Season’. Not only the Bengalis but the whole of Nainital is involved in making this a savoured occasion and seek the blessings of the Goddess.

Many idols of Goddess Durga are erected, and divided in to three stages, dedicating each section, appeasing different forms of ‘shakti’ thereby seeking her blessings. For the initial first three days ‘Kali or Goddess Durga’ who is viewed as the destroyer of evil is invoked, to deliver us from the negative forces and bestow us with positive radiance. The next three days, devotees seek the grace of ‘Goddess Laksmi’, who showers people with her inexhaustible wealth and the last three days are dedicated to ‘Goddess Saraswati’, wishing to enlighten us with wisdom and knowledge. The women folk of Nainital, fast for the said period of nine days. Every day begins with a puja, arati, and offering of ‘Prashad or Bhog’ to the Goddess. A lamp is lit throughout these nine days all along.

To keep up with the age-old tradition, folk dances, colourful processions, performances by Sufi singers, renditions by professional Hindustani and Ghazal vocalists, give life to the mountains which on other days remain inanimate with just the winds whispering.

The whole of Nainital is decorated with exquisite and colourful ‘pandals’ dotted across the city, with highly professional and crafty hands we can see the idols of the goddess come to life with well defined features and divine appeal. The face of Nainital remains transformed, with divinity in the air. This festivity marks the descending of the goddess to earth to visit her devotees and bless them. It is a major socio-cultural event for the Bengali residents of Nainital. They put up a variety of cultural events, one of it being a dance-drama enacting the story of ‘Mahishasur Vadh’.

The last day, ‘Dusshera’ or 'Vijaya Dashami' is also celebrated with great pomp at Nainital. People gather around the park where the ‘Ramlila’ is enacted by artists, and culminates in the burning of the effigy of Ravan, Meghnaad and Kumbhkarn. These huge figures are specially crafted, by trained people who come from different parts of North India. Burning of these effigies symbolise the Victory of ‘good over evil’.

Nainital is a place nestled amidst the beauty of nature. These festive seasons, being an embodiment of the connect between humans and nature, bring out the best in both the people and the region as such. With Navratri around the corner it’s about time for you to pack and visit the land of ‘Naina’.


Explore more about Culture of Nainital