Nainital, one of the most visited and scenic places of Uttarakhand hosts a lot of attractions for tourists all round the year. With natural beauty and some architectural wonders, it is also blessed with various water bodies that include lakes and rivers. 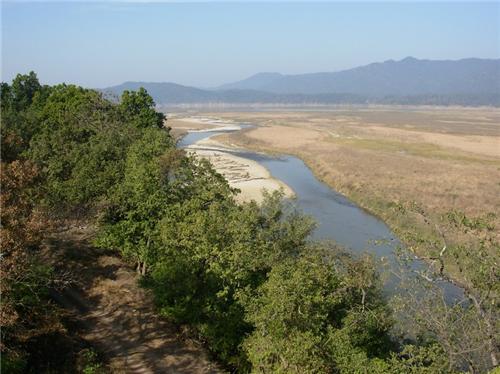 Mandal River is a small part that arises from the River Ramganga. It passes through the famous Corbett National Park situated at Nainital. It forms a big part of the all round boundary of the park, surrounding it for most of its part and flowing through north east direction. The Mandal River originates at Talla Salan in district Chamoli and finally at Domunda it goes into River Ramganga.

The river covers a distance of around 32 kilometers, travelling from its origin point to the point where it enters River Ramganga. In the season of monsoon when there are high rains on hills, the level of Mandal River rises to a much higher point. At this point of time, breeding of Mahseer fishes, one of the most endangered species of fishes of this hilly region starts in this river.

Mandal River provides ample scope and opportunity of capturing beautiful landscape through the eye of camera. As an inseparable part of the Corbett National Park, Mandal River can offer various points of interest for nature photography lovers, specially the point where it merges into Ramganga. Also it is one of the most favorite fishing points of Mahseer, popularly known as The Water Tiger. However, it will be useful to take help of local guide having experience of fishing in the area.

The name of Sonanadi is derived from its past excavations. The name means ‘River of Gold’. It is said that at some point of time, the river’s alluvial deposits that were washed down from higher areas, were filled with grains of gold. These deposits were extracted from river bed’s sand by various processes of sieving, then washing and then applying mercury treatment.

If someone wants to stay in the nearby area of this river, forest rest houses are available at Halduparao between Sonanadi and Palain rivers but bookings are to be done in advance. To reach here, one should stop at Ramnagar Railway Station from where the Corbett Tiger Reserve is hardly 14-15 km.