Raj Bhawan is a live example of Gothic architecture in India situated in the newly-carved hilly state of Uttarakhand amidst mountains at a very famous tourist spot of Nainital. Nainital has the privilege of being called as the summer capital of present Uttar Pradesh, a united province during British rule. The foundation of the Raj Bhawan was laid back in 1897 and the complete construction took about three years to complete. It hosts 113 rooms, golf link, swimming pool and lush green landscape. Today this monument is official guest house of the governor of Uttarakhand and the eminent state guests. 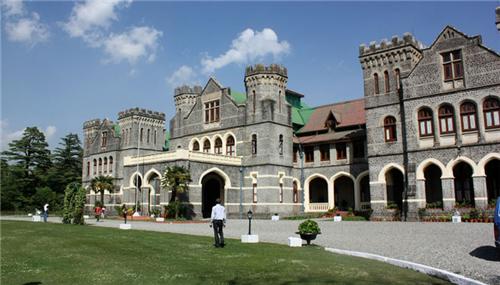 According to some local stories the tunnel in the Governor House premises had served as hideout place for famous dacoit daku Sultana also known as Robin Hood of India. It has also served as official residence to number of British officers who were the governors of united province of Uttar Pradesh namely Sir Harcourt Butler, Sir William Morris, Sir James Meston and Sir Anthony Mac Donnell.

Architecture of Raj Bhawan in Nainital

Designed by architect Stevens and the construction supervision by engineer FOW Ortel. The building has a unique pattern of peculiar Scottish Castle and is a brilliantly carved and elaborate distinct monument. The extensive usage of Burma teak has given an extensive and a very royal touch to the stair case, dining room and window panels. Local pine, shisham, satinwood have also been used at trusses, joints and flooring. While the complete glass, tiles and brass fittings were directly imported from England.

The construction has been completed with the help of local stone, mainly the dark grey marble and dolomite limestone to the interiors, naloina freestone to the exterior and a very limited usage of the Agra red sandstone. Extensive landscaping has been done to 160 acres of forest land with various extensively grown floral species along with number of faunal varieties. Raj Bhawan Nainital also hosts a 45-acre golf course built back in 1936 and is regarded as the vintage golf course in India. Tourists can enjoy the game of golf by just paying a nominal green fee. The Bonsai garden and a rich sprawling lawns with various floral varieties add to the beauty of Raj Bhawan in Nainital. The Raj Bhawan has a spacious and historic auditorium which is a special venue and is used for various government functions like oath taking ceremonies, cultural functions and seminars.

At the elevation of 1935 meters above mean sea level a beautiful golf course with well graded paths has been outlaid. The golf course hosts 18 holes along with 18 different tees. The golf course has been designed by British Army engineers and is eventually a result of consistent efforts of Lord Malcolm Hailey and is regarded as one of the most challenging golf course across the country and an example of brilliant engineering. The golf course is open for the public and is well maintained and has hosted many golf championships.

While in Nainital Raj Bhawan is a must visit. The entry ticket of Rs 20 has to be paid and the timings have to be taken extra care of while planning a visit. Raj Bhawan is open on all days except Sundays and public holidays. The timing of visit is also different at different times of the year:

Must Read:
Gurney House in Nainital