Places to Visit in Nainital

Most hill-stations in India owe their discovery and prominence as scenic destinations to the British who made it a habit to retreat to faraway places to enjoy the quiet and solitude away from their busy lives overseeing a country that was so vast and so diverse, yet mostly undiscovered. 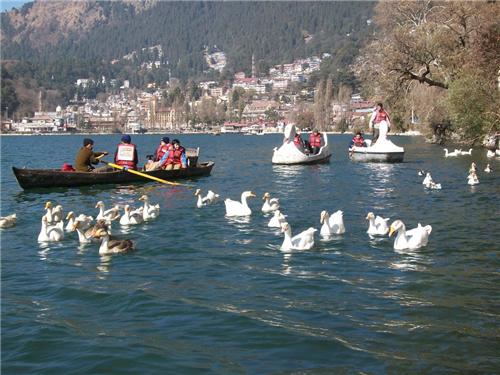 Nainital, in Uttarakhand, is one of the premier hill-stations set in the picturesque Kumaon foothills of the mighty Himalayan range. Nestled in a valley alongside a lake shaped like a pear, with imposing mountains all around, Nainital is a wondrous mix of natural and colonial heritage, offering beautiful sights and insights to the visitor. The peaks of the undulating mountain range bounding Nainital are Naina, the highest of them, Deopatha and Ayarpatha; together they offer magnificent views of the vast plains and the ridges of the peaks merging one into the other forming an important axis to the great mountain range.

Nainital is an amalgamation of the ancient and the modern in the backdrop of mother nature. The dense hillsides around Nainital are home to some of the rare species of trees – deodhar, bamboo, oak, pine and rhododendron.

Lying at over 6000 ft above sea level, Nainital enjoys what is called ‘subtropical highland climate’ with temperate summers and white winters; the cold season temperatures fall to -3°C.

Tourist Places to Visit in Nainital

What began as a summer retreat for the British colonials and Indian rajas soon became a much-sought after year-round tourist destination, catering to both ends of the tourism prism, from luxury resorts and hotels with A to Z of facilities and services to budget and economy accommodation providing value for money. Tourism is the backbone of economy for this little town.

It only needs a little imagination to plan trips in and around Nainital; it depends of course on the traveller and his take on ‘the ideal holiday’. From nature trails, jungle treks, boating and mountain climbing to just walking along the length of the Mall taking in an appreciative sweep of the colonial landmarks or looking for artefacts from the Tibetan Market to take back home, there are wide choices for everyone.

Remember timings are from 10 am to 5 pm; year round visits are thrilling but best viewing times are from late October to December before heavy snowfall occurs.

There are also a few packages put together for those who do not wish to cover all the tourist spots extensively; packages tours at reasonably priced rates for many places are on offer by tourist and travel agencies and car operators. Some of these are:


Important Things to Keep in Mind

While planning a hill station tour, dress and carry clothing depending on the time of year; while cottons keep you cool and airy in the warm summers, winters will require heavy thermal protection to keep insulated and warm from sudden snow drifts and flurries.

If you are not utilizing a travel planner or agency, gather as much information about local conditions and visitors’ time for seeing places like the Governor’s Residence, zoo and the temple.

Travel kits must always contain a map of the area, good walking shoes, basic medicine kit, binoculars and sun glasses. Of course, photography is a must to bring back visual memories of the visit, anything from a sleek digital one to the more high-end SLRs are always spotted in every tourist’s hand.