In the Lake District of India viz. Nainital in Uttarakhand, the most prominent of the lakes is Naini lake, a natural freshwater crescent-shaped body, surrounded by hills on all sides. The city got its name from the lake.

Naini lake is one of the four lakes of Kumaon hills, the others being Naukuchia Tal Lake, the Bhimtal Lake and the Sattal Lake. This beautiful lake is believed to be one of the golden green eyes of Sati - Lord Shiva’s wife (Naina is the Sanskrit word for eye). Another legend is that the exact spot where Sati’s eye had fallen is the present Naina Devi Temple. 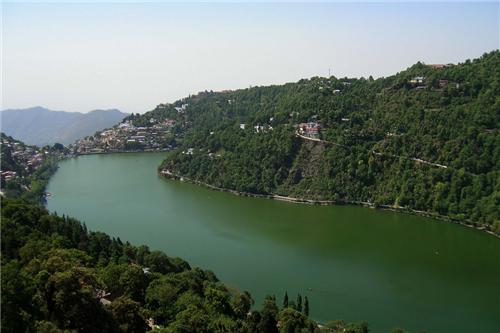 One can go for a quiet walk or go for boating amidst the lush green area. The southern end of the lake is referred to as Tallital, while the northern end is known as Mallital. And, there’s a post office on the bridge connecting the two ends, the only one of its kind. The coniferous land area of the lake bounded as it is between the Tiffin Top to the south west, snow view hills on the north and the steep Naina hill to the north west, enjoys heavy annual rainfall (to the extent of 1295 mm) in its basin region.

The flora specific to the lake and its surroundings are various trees and bushes grown in the lake’s basin such as chestnuts, walnuts, pipal - a sacred tree for the Hindus, Chinar, roses, Himalayan cypress, deodar, pine and willow. Besides, horticultural and plants with medicinal value have also been found.
Various species of fish, nine species of animals and nine species of birds have also been recorded in the region.

The lake faces threats on account of its chronic landslides in the wake of its tectonic rocks, siltation and inflow of toxic metals and substances into it such as lead, nickel, chromium, cadmium, manganese, zinc etc. These toxic materials can find their way into the food chain and disturb the ecological balance. The Supreme Court in response to a PIL (Public Interest Litigation) in 1995, has sought to revert the damage by passing several directives to redress the problem such as bottom aeration, sediment removal from the catchment areas, soil conservation, slope stabilization, watershed management, sewage treatment, improved sanitation, dredging, shoreline development, better public awareness and participation by involving all the agencies operating in the area like irrigation department, forest and fishery departments, Nainital Nagar Palika Parishad & Jal Nigam and so on and so forth. 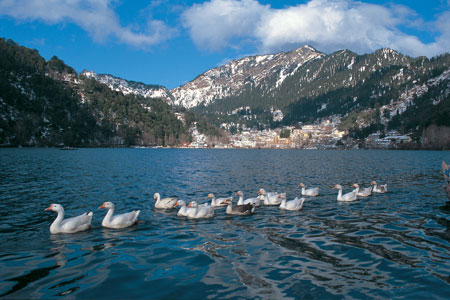 Naini Lake has been mentioned in the Hindu puranas as Tri-Rishi-Sarovar, implying that three rishis, Pulaha, Pulstya, and Atri, who didn’t find water at this spot and filled it with water after digging a deep hole from the holy Mansarovar lake (said to be the abode of Lord Shiva and His family). Popular folklore says that a dip here is worth its merit a dip in Mansarovar.

As mentioned above, Sati’s eye had fallen at the spot which is the current Naina Devi Temple. This temple is one of the 64 Shakti Peeths (holy places where the charred parts of Sati fell on their way with Shiva and where Goddess Shakti is worshipped even today).

Incidentally, an English businessman – Mr. Baron, was the first person to note and report the lake in 1839 while he was on hunting. In fact, he was so enamored of the lake that he ventured to build a European Colony on its banks. Later on, the Englishman Calcutta, a news magazine, in the year 1841 formally reported its discovery.

The lake is a good scenic spot for photograph fanatics, adventure seekers and nature lovers. The entry fee is: 160 per 30 mins for Rowing boat and 150 per 60 mins for Paddle boat.

Nearby Places to Stay

How to reach Naini Lake

Things to Do at Naini Lake