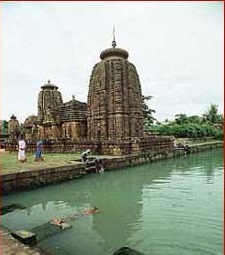 Mukteshwar Temple is located atop the highest point of Mukteshwar in Nainital district of Uttarakhand. This temple also known as Mukteshwar Dham or Mukteshwar Mahadev Temple. It is 350-year-old and is adorned with a stunning white marble shivling surrounded by the deities of Ganesh, Nandi, Hanuman, Vishnu and Brahma. The temple is approachable by stone stairs and is in the Kumaon hills at an altitude of 2312 m above sea level.

According to the Puranas, Mukteshwar Temple is one of the main 18 temples of Lord Shiva.

There is an ancient legend according to which there was a battle between a demon and Shiva and although defeated, the demon attained immortality (mukti). According to common folklore, many devtas of the Hindu pantheon as well as the Pandavas have graced Mukteshwar with their presence.
Since ancient times the iron ore miners have worshipped the Mukteshwar Mahadev Temple. The followers of “Mahesh” or Shiva conduct important religious ceremonies and rituals at the temple. According to another belief, couples longing for a child who offer their prayers with mud lamps in their hands at this temple are soon blessed and bestowed with their wish.

Chauli ki Jaali, a natural lattice around a rock, is another place of religious significance close by and according to popular belief barren women who come and touch this lattice are soon blessed with a baby. Another tale is that anyone passing safely through “Chauli ki Jaali” is the blessed one of Lord Shiva and all his prayers are granted by the benign Lord.

Mukteshwar enjoys a pleasant climate almost throughout the year. During the summer months of April to June temperature ranges from 25°C to 10°C. July, August and September are the monsoon months. Winters are cold with temperature varying between a high of 18°C to a low of 1°C. Heavy snowfall is common during the winter season.

Best time to visit the temple is all through the 12 months of the year, though you may avoid heavy monsoon rainy months and snowy winter months. Traffic blocks and flight delays can happen during this period.

Coming to the clothes you have to carry with you, winters require heavy woolens while for the summer season, you may do only with light woolens.

Places to Stay near Mukteshwar Temple in Nainital

While in Mukteshwar, you need not worry much as regards accommodation. There is many a good hotel in the town providing for a spiritual experience as also a luxurious stay. Alternatively, you may like to put up at Nainital and make a day time visit/trip to Mukteshwar.

How to Reach Mukteshwar Temple in Nainital

By Rail: Kathgodam is the closest Railway Station about 72 km away. It’s a 2 hour drive from the railway station to Mukteshwar.

By Road: You may reach Mukteshwar from Nainital (51 km) or Haldwani (72 km) by road. The uphill drive from Nainital via Dhanachuli and Bhowali is glittered with some breathtaking scenery and views.