The sylvan hills, pony rides, riding trails, grassy lake banks, lofty mountain heads, shadow play in the lakes, synchronization of man and animal, trained horsemen, scenic spots. The verdant hills that surround the lakes of Nainital offer large expanses of horse riding area that can be used for the sheer riding pleasure of children and adults alike. There are several scenic spots that one can ride to end enjoy both the journey and the destination. There are several quaint trails that have been carved into the green hills by many a habituated rider. What is best is that there are several known and unknown trails that can be taken by the horse rider for his pleasure. The best times for horse riding are in the mornings or late afternoons. 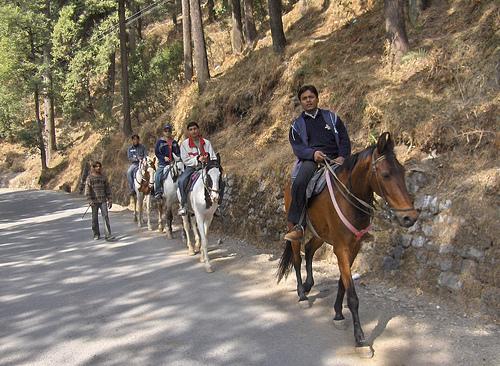 Among all the pleasures that are rare and pleasurable in this fast paced world there is the smooth and wonderful pleasure of horse riding through uncharted territory among the beauties of nature. Savoring in the bounty of nature’s generosity the horse rider more often than not is lost in a world of his own once he is sitting astride his horse.

In Nainital horses were a common site till the influx of tourism and the demand for the horses grew. Earlier horses could be had from Mallital, but there the administration took serious note of the pollution and garbage being accumulated because of the increased horse-riding enthusiasts among the tourists and the growing numbers of the tourists. The horse and pony owners were asked to refrain from collecting their animals in that area as there was the constant threat of pollution and garbage accumulation besides the stink and mosquito’s accumulation. Taking a stringent view on this situation as it was detrimental to the encouragement of the tourist trade in the area the government asked all the horse, mule and pony owners to shift their business to Bara Pathar.

Places for Horse Riding in Nainital

The rides along Bara Pathar trails are the stuff of memories. Walking over the cobbled stones to the clippity clop of the horses hooves was a heady enough experience and when the horse lifted into a smart trot and a canter there is the added exhilaration of having the wind lifting one up to mind blowing experience. The horses are well trained and are usually those that have been retired from the army and police lines. They are disciplined, well turned out and afford a comfortable and majestic ride in the lap of nature. The ponies and mules are suited to the children and some of the ladies and gents who are not used to riding but for the one who enjoys riding the hilly tracks of Nainital are an open invitation.

Often in the mornings the horse riding begins as early as six am if you get the horse man to get you your horses to where you are staying then it is a refreshing experience to go across the hilly slopes at a smart clip and raise the blood stream to its paces. One may well return with rosy cheeks after a goods hours gallop though the leafy lines pathways of the hills.

Tiffin top and Land’s End present the rider with a panoramic view of the hills and lakes that form the substance of beauty and breathtaking tableaux of hill people going about their daily chores. The horses too are used to the easy lop at which they must go so that the rider is neither hurried nor bored. The canopy of trees whisper green secrets to the rider as he or she trundles along the tender green shoots caressing the flanks of their horses. The horse ride in itself is an experience as is the destination. Once having reached it one is still not satiated and one seeks to return to base by a long and circuitous route rather than a short one.

During all seasons Nainital has an appeal but the horse riding has an allure all its own. One can go horse riding in the cool winters and spring as also in the warm summers and even in the monsoon
thought the trails tend to get slippery then.

The best time is early autumn and spring when the freshly fallen leaves make a colorful carpet for the horses to walk majestically on and the tiny ferns are unraveling their heads at the foot of most of the tall deciduous trees. The sure footed horses have been transporting men and materials all over the world but the truest pleasure of all is riding a horse just for the sheer pleasure of riding only rather than using it for some load carrying a s beast of burden.

Often in the mornings when the sun is slowly making its way across the hilltops in a watery, flowy kind of manner it is thrilling to see the misty breath of the horses competing with our own lungs capacity to cope with the changed pace of breathing and taking in the loads of fresh mountain air. The feeling is unmatched as one takes rhythmic steps towards the top of the hillsides knowing full well that a vast treasure awaits as we see the first rays of the sun touch the misty mountain tops. The golden fingers seem to tint each tree top in a steady and sure dance that seems to tease and cajole the leaves of the tree tops at the same time. The scene is unworldly and yet a rare sight that lives with one for eternity.

Instructions while Horse Riding in Nainital

The horsemen accompanying the horses often have a trick or two up their sleeves to help the children endear themselves to their animals. Just before mounting the horse the child is asked to make himself or herself better acquainted with the animal. Many a child has bonded with the animal by simply asking the name and then repeating the name of the horse over and over all through the ride. The horse men even carry a special treat of a sugar cube or a carrot to entice the horses and further help the child understand the needs of the horses. During this interaction itself many a child has been known to have become a friend of that particular animal for life literally! So much so several children make it a point to smuggle sugar cubes from their parent’s tea to be able to gain the friendship of their horses. These horses are specially gentle with little children and obey the voice commands of their ‘sais’ or keeper or groom.

Some of the eminent sights that are an essential part of the ride a and one just has to take during the horse riding routes are the Waterfall, Khur patal, Tiger top, Kilbery, Naina peak, Dorthy seat, Lands end, Himalaya Darshan and Tiffin Top. Almost each one of them vies with the other for beauty and breathlessness because each one of the views is so very overwhelming that it just literally takes your breath away.

Therefore, no matter one may do in Nainital the only proper thing to do is to plan a horse riding trip every morning and take in the bounty of nature as it had been meant to be savored by mankind. Trot along, talk to the trees and virtually drink in the long-lasting magnificence of the Nainital hills astride a horse’s back.

Must Read:
Boating in Nainital