Nainital has always been famous for its hills and beauty but it is also a religious spot for the third largest religion, Hinduism. The city has been part of a few myths and legends of Hindu scripture.

Sati decided to consign herself to sacrificial fire after her father Daksha had disrespected her god. It is also said that when Lord Shiva was carrying the burnt body of goddess Parvati, some parts of her body fell at 64 places, called as Shakthi peeks, one of them being Nainital. Nainital derives its name from the Naini Lake; Nain signifying the eye of Sati. 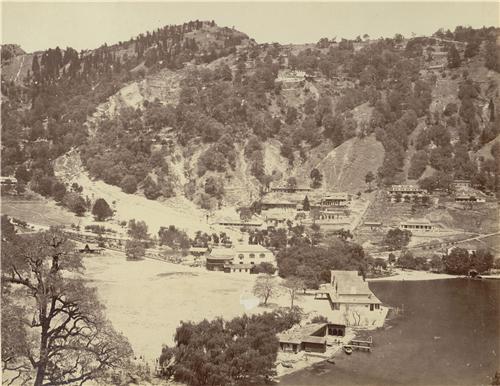 Manas Khand from the Skand Purans has also mentioned the city and called Nainital as the Tri-Rishi-Sarovar. According to the legend, there was no water in Nainital, so three rishis decided to dig up a hole and fill it with the holy water of Lake Manasarovar from Tibet, which later was called as Naini Lake. Even today, people take holy dip in the Naini Lake.

The discovery of Nainital is also attributed to two foreigners, one was Mr G.W. Traill, who was then the Commissioner of Kumaon and Garhwal and Mr P Barron was a European entrepreneur. When in 1832, Mr Trail first found Nainital he was astonished by the sheer beauty of the lakes and the splendid nature in front of his eyes. He never revealed this secret as he thought that the people will never understand the culture of the residents of Nainital and would destroy mother nature’s beauty.

Mr P. Barron was of a completely different mindset. In 1839, when he reached Nainital by mistake, he could already see a big resort and money rendering vacation spot, soon he started colonizing it. He called it to be the “best site on his 1500 miles trek of the Himalayas”. A local villager earlier claimed to be the owner of the lake and surrounding hills as his ancestral property. But Mr P. Barron blackmailed him to get his land and soon he started building his house. The house was named Pilgrim Lodge and it can even be seen today.

After witnessing the sudden rise in colonisation of Nainital - Jim Corbett was a world renowned hunter, famous for his stock of mean eating tigers and leopards - Jim Corbett thought of the plight of the animals who had earlier roamed freely in the hills but can’t anymore. He emphasised on creating a national reserve for the rapidly fading Bengali tiger. In 1975 the Government of India named the National Park Jim Corbett.

Landslide of 1880 in Nainital

Alma hill was a landslide prone area, it had already suffered two land slips in 1866 and 1879 but the one in September 1880 changed the history of Nainital. Two days after heavy rains the land slipped and buried 150 people with it. In those 40 hours, 25 inches of land slipped and this caused a sudden surge of water from the hills. People were working to divert the water from affecting Naina Devi Temple, the volunteer orderly room and the Bell’s shop but all in vain. There were 108 Indians and 42 Britishers among the missing and dead.

The destroyed temple was resurrected on a recreation area called ‘the flats’ which was built on the spot of the landslide.

Since Nainital was a prominent European site, many schools were built for the Britishers during the Edwardian and Victorian eras. Nainital Municipal Corporation was also established by the Britishers. Due to the rapid influx of the Britishers to Nainital after being found, it was thought of as necessity and constructed in 1850.

Indians were confined to work as labours and for other services. Even after the landslip of 1880, this trend continued until one day in 1925 when the British civilians were rewarded with subsidies to go to England for their vacation. By 1947, the year of Independence, the British population was almost zero and the city was filled with Indians.