Ghorakhal is a small little rugged place perched at an altitude of 2000 meters above the sea level famous for the temple of Lord Golu Devta worshipped by hill people.

It is under the jurisdiction of Nainital district in Uttarakhand, at a distance of roughly 3 km from Bhowali and approximately 15 km away from the Sarovar Nagri viz. Nainital. Literally speaking, Ghorakhal implies ‘a pond for water to horses’. It’s a serene, placid and picturesque natural site. 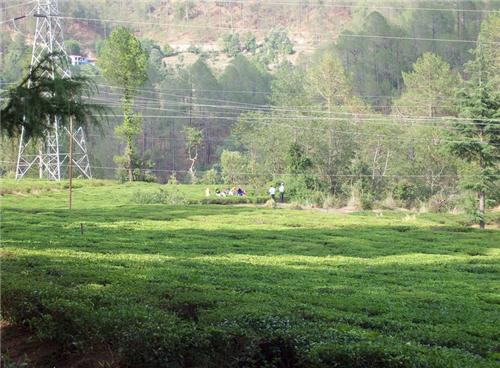 Ghorakhal is most famous for its Golu Devta Temple, unique for the rituals carried out. One of such rituals is that devotees seek desired decree in litigations by making petitions at the temple, using stamp papers. When the desired petition is fulfilled, the deity is perpetuated by making animal sacrifices or hanging bells. In other words, the bells are hung by the devotees in thanksgiving on the accomplishment of their wish. The deity which was, at one time, a sort-of law court deciding upon several pleas received from the distressed people of the region is also offered sacrifices of goats.

Golu Devta, the presiding deity of the temple, is considered to be ‘The God of Justice’ and an incarnation of Lord Shiva.

Historically, it is accepted that Golu Devata’s place of origin is Champawat. His mother Kalindra is said to be the sister of two other local deities Sem Devjyun and Harishchand Devjyun (the divine spirit of Raja Harish of the Chands); both of these two deities are considered as Lord Golu’s uncles.
According to another belief, Golu Devta served as a General in the army of Baz Bahadur (1638–78), the Chand king, and passed away after having exhibited exemplary valor at war and a temple was erected in his honor 8 km from Almora city at Chitai.

Still, another legend suggests that Golu Devta, on account of some dubious facts, was beheaded by the king of Binsar, and his head fell at Kaparkhan, near modern day Binsar, a few km from Almora while his body fell at Gairad at Dana Golu. There is the most ancient and original temple of Golu Devta at Dana Golu. 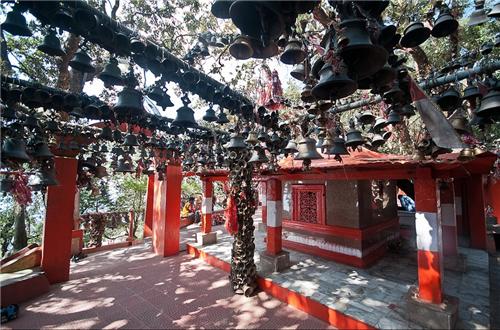 However, the most common legend about Golu Devta has it that a local king on a hunting expedition sent his servants to look for water. The servants caused disturbance to a lady who was praying. In a fit of anger, the lady taunted the king saying that he could not separate two fighting bulls; whereupon, she ventured to so herself. The king, very much impressed by the valiant deed of the woman, proceeded to marry her. Upon passage of time, this queen of the king begot a son. And, the other queens, who were very much jealous of her, proceeded to place a stone in its place. Furthermore, they put the child in a cage and the cage into a river.

This child was found by a fisherman who proceeded to bring him up. Upon passage of time, the boy came of age and took a wooden horse to the same river. On being questioned by the queens about this rather silly action of his, he replied that if a lady can give birth to a stone, then a wooden horse can surely drink water. When the king came to know of this entire episode, he sent the guilty queens to the gallows, punishing them for their cruel past action and jealous nature. At the same time, he rewarded the young wise man by crowning him as the king. It was this particular king who came to be known as Golu Devata in due course of time.

Places to Stay Near Ghorakhal

You can easily reach Ghorakhal by hiring a taxi/cab from Nainital (15 km), Kainchi Dham (13 km) or Bhowali (3 km).

Places of Interest near Ghorakhal