Fairs and Festivals in Nainital

Nainital is known for its beautiful and eye catching natural beauty. There is a huge gathering of tourists in Nainital and in order to entertain them and catch their attraction there are several fairs that are organized in Nainital to keep the entertainment ongoing. This city is a cultural city that is also poured with several believes, traditions, culture, customs and faiths. These all depends on the type of different people from different segments living in Nainital and nearby areas. Therefore, this city is a spectrum of variety of fairs and festivals that fall entire year and on special occasions. There is a unique and traditional style of celebrating these occasions by the local people and tourist also form an inseparable part of them. 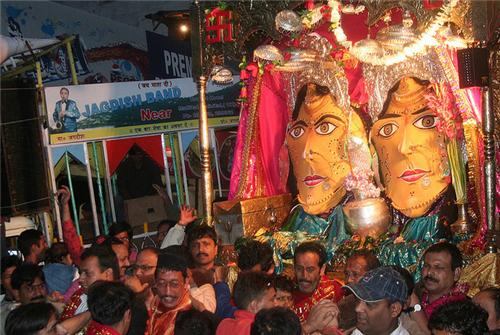 The festivals and fairs in Nainital have a special charm and environment, they generate a zeal in the people residing in this city and the people visiting it. The most famous festivals in Nainital are Bikhauti, Hariyala, Khatarua.

This festival is important for artisan and agriculturists. It commemorates on the first day of Hindi month Bhado that fell in August. Artisans and agriculturists present gifts to their land owners and other people who facilitate their trade and business. This festival is popularly known as Olgia in Nainital where people of the Nainital eat Ghee and also pour the same on their forehead due to special ritual.

This festival is known for bringing peace and a feeling of brotherhood among the people of Nainital. It is popularly known by the name as Phooldeli. In this festival young girls take active participation by putting the first flower of the season at the entrance of every house. This festival commemorates in the month of March. It is the feeling of the local people that the first flower of the season will fill their life with happiness, prosperity and good luck.

This popular festival is celebrated in the month of Shravan according to Hindi calendar which fall in July and August. At this occasion it is believed that Lord Shiva and Goddess Parvati got married and is celebrated for this reason along with welcoming the monsoon.

This festival is celebrated about nine days in the month of Chaitra and is also known as Navratri. There is a trend of fasting for these nine days. It is the symbol of bringing the joy and prosperity in the life. In this festival the tradition of sowing the seven types of grains and a belief that these seven seed will fill their life with seven colors and prosperity.

Khataura festival in Nainital is known as the celebration of the loved season of autumn. It is held in the month of Ashwin, as per Hindi calendar which falls in September. It is believed that making cucumber offerings to God will remove all the evil energies and influences from the life and positive energy is generated.

It is celebrated on the occasion of the ending of the winter and coming of the spring season. It is celebrated in January till February and Goddess Saraswati is worship. It is the tradition to wear yellow clothes and yellow tilak. This festival also falls in the famous Hindu festival of Holi.

It is celebrated on Krishna Amavasya. Women worship Savitri and Bat along with keeping fast and pray to God for the well beings of their husbands.

The fairs are the most crowded places and are enjoyed by every people in Nainital. These fairs are the celebration of special occasions and are the center of shopping and enjoying the culture of the city. Below are the famous fairs of Nainital city.

Sharad Utsav fair is conducted in October. At the time of this famous fair there is a culture of conducting several different types of dances, arts and cultural programs that leaves an everlasting impression on the tourists from entire world.

At the time of celebration of this popular Ranibagh fair people gather in a huge amount. This fair is celebrated at Ranibagh on the day of Uttarayani which is about 30 km away from the Nainital city. It is the most awaited fair of the Nainital city and nearby locations.

Nanda Devi fair occurs in September and is the symbol of assorted tradition and culture of Nainital. Local people organize several cultural programs to show the tradition of the city and present the faith and beliefs of the local people to the visitors. The Dola of Nanda Devi is worshiped and attracts huge crowds. During this fair special prayers are offered for the prosperity of material and spiritual items. It is commemoratd at several places like Almora, Nautti, Dandidhara, Nainital, Ranikhet and Munsyari.

This fair is held inJanuary on the occasion of Uttarani. The fair is held at different places in Nainital and the places are Rameshwar, Salt Mahadev, Bageshwar, Chitrashila and Pancheshwar. This festival reflects the culture of entire Uttarakhand state along with the Nainital and it has Kumaon tradition and rituals.

Explore more about Culture of Nainital