Nainital, a city nestled among the white and green hills and a land full of nature’s most beautiful lake. It is a city very different from our metros and the people have a very simple lifestyle. This is mainly due to the fact that they have always distanced themselves from the 'maya' of shopping malls, metros, etc. Although, it has grown tremendously in the past few decades, thanks to its tourism section, the city still has deep roots tied to its culture and heritage. This makes Nainital all the more beautiful as it will give you a look back at the forgotten part of India. 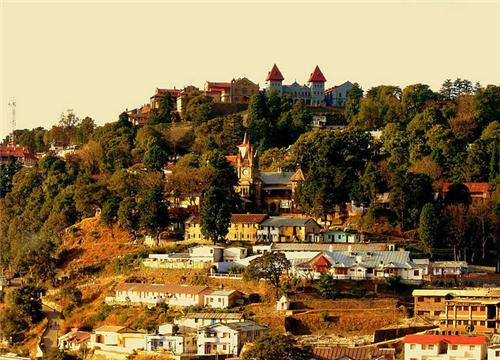 The people of Nainital are called Kumauni. They have lived here for centuries and reside in the hills among the small hut-shaped houses made up of stones or red brick with tin roofs. Some villagers keep animals on the ground floor, called the Goth and themselves live in the above floor. They are very religious and highly superstitious, evident with the black kaajal that they apply on their forehead which protect them from any evil and spirit. The deities worshiped in Nainital are Bholenath, Naina Devi, Gangnath, Nanda Devi, Kail Bisht, Sunanda Devi, Golu, Haru, Sam and Adi. They also perform ‘jaagar’ which is an act of calling out on their gods and deities, performed only on Tuesdays, Thursdays and Saturdays. The languages spoken are Garhwali, Kumauni and Hindi. 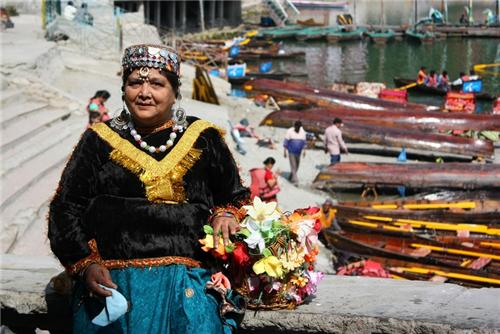 Women of this society prefer wearing a Lehenga and a Pichora, another tradition which has been here for decades now. But they have also started wearing sari but Pichora is still preferred in the festivals, and look really beautiful. The Pichora is also prepared in an ancient traditional dyeing art known called ‘Rangwali’. Designs of swastika, sun, bells, moon, shells, etc are made around a swastika and imprinted on a bright yellow cloth. Married women are always adorned with Sindoor, Mangalsutra and a nose ring and Hansuli, which is a golden necklace. A tilak, which is a mixture of rice and turmeric, is applied on the heads during festivals. The men wear long sleeves kurta and a cap during winters.

The auditoriums in Nainital are not good in number and are rarely found. However, some luxury hotels serve this purpose of auditorium in Nainital.

Musical instruments like Turturi, Hurka and Dhol are used by the people for displaying their joy. Chholia Nritya, a traditional dance is performed with a sword and a shield. Other dance forms famous here are the Chhapeli and The Jhora. Being in the north, Bhangda is another famous dance form. They have many fairs celebrated throughout the year, some of them are mentioned below. 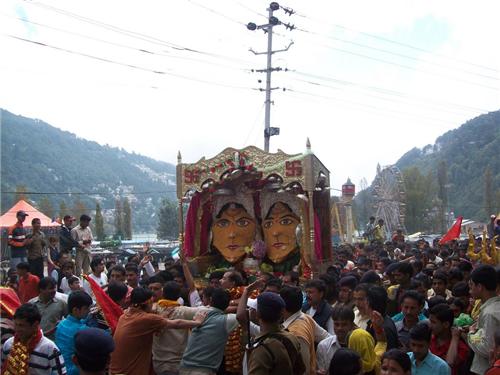 Every year in September this festival is celebrated with a lot of joy. Started in the 16th century by King Kalyan Chand this fair is about worshipping goddess Nandadevi and Sunandadevi. A long rath is carried around with people seeking their blessing for a good and prosperous life.

Garjiadevi temple, located in Ramnagar, is influxed by a thousand devotees during the Garjiadevi Fair.

It celebrated in October. It is one of the long running fares and you can witness many cultural programs, folk dances and folk arts.

The Fair is celebrated in July. This festival is to thank God who had blessed the people with the greenery and the beautiful environment all around Nainital. It is usually celebrated after the rainy season.

Both the Kumauni and Garhwali people come together to celebrate Vasantotsav. Held in the springs, the festival is celebrated in January in Ramnagar. Both, Indian as well as International tourist, enjoy this festival and celebrate it with full of joy and pomp.

Held in the honour of Lord Shiva, Chhota Kailash Fair is celebrated in February on the auspicious occasion of Mahashivratri.

Phooldeli is celebrated by young girls; they decorate their place with flowers and garland them. It is believed that this festival is for love and prosperity.

Lord Shiva and goddess Parvati are together remembered in Hariyala Festival. This festival is celebrated in the month of Shravan.

Celebrated on the first day of the Hindu month of Ashwin, it welcomes the arrival of the autumn season. Cucumber is offered to the gods so that they kill all the evil spirits. 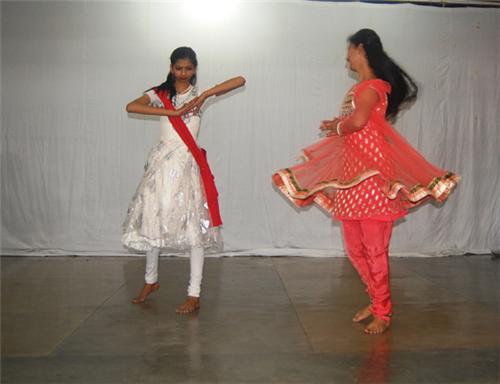 Nainital is a traditional and cultural city that is blessed with lots of music, drama, cultural programs, art and dance. The impression of these can be felt and seen at the time of fairs and festivals that fell throughout the year. Along with the tourist spot, it also encourages the participation of the local and tourists in the cultural dance program. This city is not largely engaged in music and dance from the ancient time, however, the dance is now gaining more importance among the new generation. During the festive season singers and dancers of the city perform several folk dance programs that shows the true pictures of the love for dance among the people. The same is also enjoyed by the visitors visiting this city and nearby tourist areas. The special dance of the Nainital area are Langvir and Bhotiya.

Below are the list of popular institutes that promote the culture of dance and provide training of dance to the young generation. These institutes are not large in number, however, they are enough to cover entire dance lovers of the Nainital.

Nainital is now emerging as a city where the new generations are the lover of arts. There are several art galleries in the city that attract the art lovers. This city is now gaining importance in terms of artists and sculptures. The famous art galleries in Nainital are provided below:

Art and Craft Centres in Nainital

The tradition of Nainital absorbs different styles and present the same to the visitor. There are several institutes and private tutors that provides training of the art and crafts in the Nainital city. These art and craft classes generates earning opportunities specially to the womens of Nainital. The demand of hand-made items of Nainital such as paintings, ornaments and wood materials are increasing every year. The art and craft of Nainital can also be seen in the folk culture, music and dance of this area. The special dances such as Langvir and Bhotiya are the best examples where the art of Nainital area can be extracted.

The popular art of the Nainital can be seen in ornament where the designs of ornaments reflects the art which the goldsmith uses in making them. Most of the wooden items such as doors and windows shows the paintings and designs of animals, birds, fishes etc. Apart from this the paintings styles of this city are Aipana, Alpana and Pith.

There are below schools of art and craft that provides their contribution in promoting and transferring the art and craft of Nainital to new generation.