10 Must See Places in and near Nainital

Nainital is one of the best and popular hill station in north India. It has several nearby locations that form the places of attraction for the visitors throughout the year from entire world. There are several places to visit and are must see places for tourists visiting Nainital. The natural beauty and the pleasant atmosphere add an additional charm to the travel to these places of Nainital. The popular places are Land's End, Naini Lake, etc along with the nearby cities and towns that are of tourist importance such as Bajauniyahaldu, Bhimtal, Bhowali, Kaladungi Lalkuan, Mall Road in Nainital, Ramgarh and Mukteshwar. Therefore, missing the beauty of any of the below places by the tourists cannot be afforded and cannot be compensated with other tourist places. 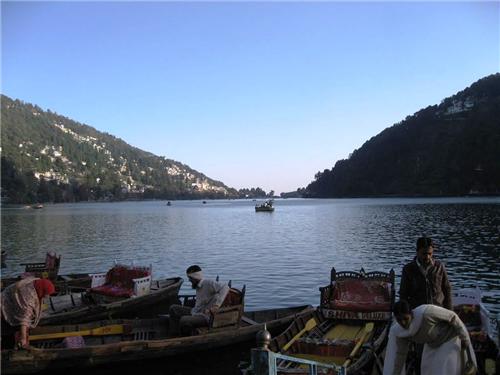 It is the famous and well known market place in central Nainital and is best strolling area. It is surrounded by the forest on one side and Naini lake on the other side. There are several banks, shops, hotels, post office and other service providers are located. There is a special restriction of vehicles during certain seasons and for particular times on entry on Mall road and is opened only for pedestrians during it. People enjoy the natural beauty by strolling at Mall road. Apart from this Mall road there are several other market places such as Bhotia Market, Tibetan Market, and Bara Market in Nainital city.

Click Here to Read More on Mall Road in Nainital

It is the nearby locality of Nainital city which is a nagar panchayat and a famous hill station to attract tourists from all around the world. Along with tourist destination, it is also known for the very famous paper mill of Birla Group. Lalkuan has ATM machines, banks, railway station, travel agents to serve the huge population of tourists and local people.

Kaladungi is among the famous hill stations of Nainital district and is located at the foothill of Nainital. The climate of this area is pleasant that attracts heavy crowd of tourists. The summers are somewhat hot, but the winters overcome the pain of the same. It is approx 30 km away from the Nainital city and has direct road connectivity with Delhi and Moradabad. Kaladungi also have forest area and it is the main commercial center and business place for the villages surrounding it. This place is developed to certain extent and is equipped with several government organizations such as Government hospitals, banks, post office and also have proper facilities such as electricity and water.

Bajauniyahaldu is a village that is surrounded by the dense forest and is located in the foothills of city Nainital. This area is also blessed by the famous river Baur. It is important tourist place which provide the natural scenic view of the localities of this place. This area is also rich in agricultural products as agriculture is the main occupation of the local people of this village. It is the main supplier of products like tomato, millet, wheat, rice, along with other vegetables to the areas of Nainital and other states of India. The people of this area mostly speak Kumaoni language. Bajauniyahaldu has good connectivity with the rail and road as this village is about 36 km away from the railway station of Kathgodam and airport is about 75 km away that is located at Pantnagar.

Bhimtal is another famous area in Nainital district which is also a nagar panchayat. This area is just about 22 km away from the heart of Nainital city. This area is popularly known as the best tourist place and the major attraction of the area is Bhimtal lake and the island at the center of this lake attracts tourists from all over the world. It is also known as the mini district headquarter because of the most of the administrative offices that are located here, Vikas Bhawan is among the one. The area is blessed by the pleasant and healthy climate and is mostly preferred by the nature lovers. It has a very ancient and famous Temple of Bhimeshwar Mahadev and was constructed in 17th century.

This is a popular town and a hill station which is a municipal board of the Nainital district. It is located near the Ghorakhal which is popular for Golu Devta Temple. This place is surrounded by several famous tourists places such as Nal Damyanti, Sat tal, Bhimtal, Sukh tal, Khurpa tal, etc. It is just 11 km away from the central Nainital. Bhowali connects all the nearby hill stations of the Nainital area by the roads. It has a famous T.B Sanatorium that was established during 1912.

This is the attractive lake that is situated about 11km from Nainital and is the famous tourist destination. It is known for agriculture and terraced farming is the popular way of farming. The agricultural products produced here are basically vegetables.

This is also among the famous Tals of the Nainital. It is known for the pure and clean water of the tal and is unexplored by the industrialists and other businessman for setting up industries here. The best time to visit this place is during summer as the climate remains pleasant during this time.

Mukteshwar is situated in the regions of the Kumaon hills and is about 51 km away from Nainital city. This town has its own radio station that is popular by the name Kumaon Vani radio service, it is very popular in this region and is the best mode of communication of information related to agriculture, weather, news, education, along with providing entertainment to the local people and tourists visiting this place. The radio service covers about 10 km of radius area along with the nearby locations. It has the Imperial Bacteriological Laboratory that is meant for protecting animals from plague and other diseases. This area is known for its temples such as Shiva Temple. Other attraction of this place is overhanging cliffs that is used for rappelling and climbing the rocks.

Ramgarh is among the smallest tourist place and a hill station of the Nainital district. It is situated on the way to the famous town of Mukteshwar. Ramgarh is know for orchards and is the best snow fall sight viewing of The Himalayas during winter season. This place is also blessed by the ashrams that were established by Narain Swami and Rabindra Nath Tagore and a library that is specially dedicated to Mahadevi Verma who wrote the known story of this place named Lachma. Along with the above destinations it is also known for popular for Garjiya Devi Temple and Seeta Bani Temples along with Jim Corbett National Park that is situated nearby this place. It is the gateway for this national park. This area is well connected by road to the major locations of Nainital.